The deadline for EU Settlement Scheme applications has passed on 30th June 2021. Since the start of the Scheme in August 2018 (this includes initial pilot period, as the Scheme was widely opened to everyone in March 2019) until the end of the application period, there were over 6 million application submitted in the UK. This was significantly higher number from initially estimated 3 million (hence the name of the organisation the3million).

As we observed a great rush towards the deadline, with many people trying to submit the application before the 30th June, the number of outstanding applications by that date, reached (unsurprisingly) 500 000.

This is of course not the end of the Scheme, as there are provisions for late application for those with reasonable grounds to apply. We have covered that in our previous blog post.

In late September, the Home Office published more detailed, quarterly statistics and so we decided to have a closer look on the figures for Scotland and Scottish local authorities. You can access tables with data on application submitted in Scotland by 30th June 2021 by clicking on the button below:

According to the latest statistics from the Home Office, until 30 June 2021, there have been 294 230 applications to the EU Settlement Scheme submitted in Scotland and 270 930 of them have been concluded. 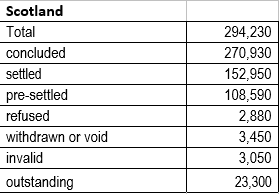 In the second sheet of our analysis, we have compared the figures from June 2021 with those from March 2021 and calculated the change in each category of applications. The last 3 months before the deadline were indeed very busy. Over 30 000 applications were submitted but the number of non-concluded applications nearly doubled since March and reached 23 300. This corresponds with what we can observe in the queries received in the last few weeks. Many people who submitted their application few months ago still haven’t received a decision. We have decided to point out just a couple of trends in the period mentioned, but we encourage you to have a closer look at the tables and find more details about the EUSS applications in your local authority.